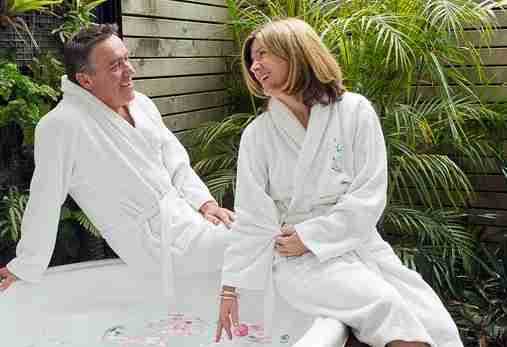 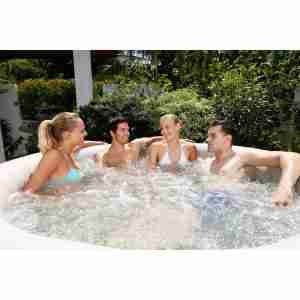 But they (a) don’t want to pay a fortune for them and (b) want to make sure they’re durable.

A little fact-checking (as they say in the current political debates) is in order.

Inflatable spas have come a long way since they were first introduced to the market several years ago.

Who are the leaders in the field?

There are several models put out by camping gear leader Coleman. And they are consistently ranked highest in customer satisfaction.

These spas have a tough, cloth-covered wall that’s firm enough to sit on, yet inflate within minutes.

The floor is padded (that’s also where you sit) and they come in both a four-person model and a roomy six-person version.

One version (the Lay-Z-Saluspa Paris) even has a built-in light show.

These inflatable hot tubs come with a heater, air compressor (for blowing up the spa and its cover) and an intuitive digital control panel

This dandy control panel allows you to set the temperature to a steamy 104 degrees F.

In addition, a powerful motor pushes a stream of massaging bubbles through 120 jet nozzles around the spa’s upper perimeter.

Who has the most durable construction?

The Coleman brand, while the most inexpensive, doesn’t boast the most durable walls and filtering system in the industry.

That distinction goes to a company called Intex.

Intex puts together their inflatable hot tubs with patented, three-ply high-strength fibers woven into their side walls.

This makes them virtually as steady to sit on as an in-ground spa.

This system, according to the company, “makes your spa water gentler on the skin, clothes and the entire spa system.”

Both the Coleman and Intex brands come equipped with easy-to replace filter cartridges, floating chemical dispenser, and a carry bag with grab handles.

What about customer reviews? 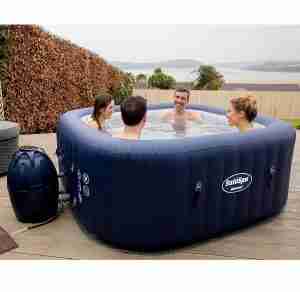 As for reviews, both companies received scattered complaints about non-functioning components.

These included such things as heaters that didn’t work properly and automatic shut-offs that kicked in too soon, resulting in a longer wait time for heated water.

However, both companies responded to the concerns — Coleman more quickly than Intex, according to the reviews left on the Amazon site.

Two other features of distinction:

Finally, a major advantage of inflatable spas is that you can easily deflate them, pack them up, and take them anywhere.

Take your tub to a vacation rental in the mountains or at the beach — or even to visit relatives for an extended time.

As long as you can find a nice, level spot (on grass, wooden decking, or concrete) and have ready access to a garden hose and a 110 AC power source, you’re good to go.

How long do they take to heat up?

It depends on how cold the water is when you first fill the hot tub.

The average temperature of water right out of your garden tap is around 68 degrees.

Most customers of both Coleman and Intex spas reported that it took almost 24 hours to bring the temperature of the water to 104 degrees F.

However, after use, it drops to around 80 degrees with the cover back in place. Then, say owners, it takes only a couple of hours to raise the temperature back to 104.

What about increased electric bills?

It bears mentioning in passing that you should be ready for a spike in your electric bill while heating the spa initially.

After that, while in maintenance mode, it just draws a trickle.

Then, there’s a small increase when you bring the temperature back up.

This rise in electrical usage will be especially noticeable if you decide to use your spa during the winter.

Inflatable spas really are a good value for the money.

They don’t last forever, of course, but:

That would give you a much better ROI than enduring the expense and landscaping disruption that would be caused by excavation for and installation of an in-ground hot tub.

So, are inflatable spas any good? The answer, across the board, is yes.